After upgrading from windows 7 to 10,  IE 11 doesn’t open.  I have searched a lot but didn’t find a solution.  One solution suggested it was due to logitech camera’s process monitor. but removing that didn’t solve the problem.   The error log in event viewer was this:

After some digging, it turned out it was due to EMET 5.2 Microsoft mitigation service.  seems Microsoft security service breaks its own program.   I uninstalled it, IE 11 worked. I reinstalled it after downloading it again from Microsoft site.  IE 11 stopped working.  I opened EMET notification and went into apps and tested the different checkboxes for IE.  unchecked EAF and leaving other checks worked.

TL;DR;  If you have EMET 5.2 installed, opening EMET, going to APPS -> unchecking EAF in front of Internet Explorer and then OK should make IE work again.  what security implication that means not sure. but Microsoft should fix this soon. 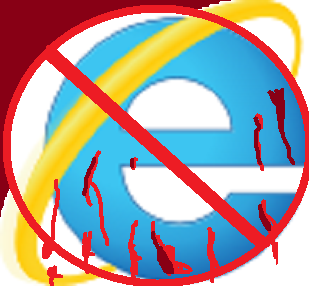 IF your site is running too slow on IE 8 or IE 9, but it is working perfectly fine on Chrome and Firefox. Check if you are using shadow filter in your css. While Internet Explorer is generally slower than Chrome and Firefox, It is not as slow as when using shadow filters. It really performs terribly that render your site useless and deter visitors from ever daring to visit your site. This is why you should never use filters again. Even scrolling becomes too slow and jumpy. Opening javascript dialog boxes such as jquery lightbox takes extra seconds that it makes the website hard to navigate. While Microsoft describe shadow filter as depreciated on MSDN for IE 9 and above. it is still inexcusable to have it perform this slow especially that IE 8 only supports that way.

The following css makes a huge performance degradation in IE :

Here is a demo of the issue, try this on IE and then on Chrome/Operate/Firefox/Safari. Try to click remove and add filters and notice the difference. Click the images to trigger lightbox and see how slow it is when the filters implemented. Even on simple text page, it is still slow when scrolling. On Chrome and Firefox, the shadow implemented using box-shadow which performs excellently.